The idea started out as a way of playing on the beach and being able to walk on water. The problem was, you couldn’t control it, and we were worried you’d end up floating off to South America…so we started rolling people down hills instead,” says ZORB inventor and operator, Andrew Akers.

Constructed in Andrew’s garage, the pair called their double skinned inflatable sphere invention, the “ZORB”, and began trading in December 1995. A temporary site was set up in Auckland until the first permanent site was established in 1997 in Rotorua, where Andrew’s brother, David Akers, joined the business to help run operations.
Today David oversees the strategic direction and planning for ZORB New Zealand our international division and is on the board of ZORB Rotorua with a focus on product development, site audits, health, and safety.

Andrew takes on the strategy for ZORB Rotorua, finances and leads our charge in sustainability and his sense of humour and creative can be seen in many parts of the business.
Having 25 years of combined knowledge taking a new product from an idea right through to selling it to the world gives David and Andrew the advantage of knowing how their products work in a commercial environment. 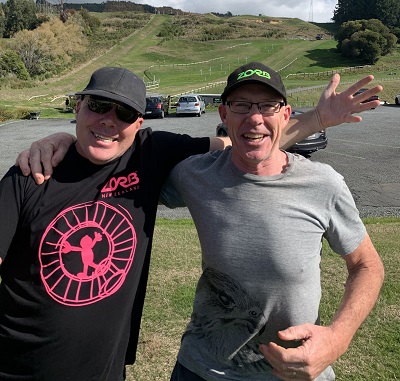 The brothers don’t do it all by themselves, the ZORB NZ team have an epic management team…..

Kelly Hemana joined David in the ZORB factory in the 90’s and then was trained to work onsite and was the Operations Manager and General Manager of ZORB Rotorua. (he’s been around a decade or two!) Kelly knows all the quirks of operating a site and how important vibe is in delivering a great customer experience. Kelly works on the various projects that David and Andrew have on the go and on the odd occasion you can find him driving people up the hill…beep, beep!!

Melissa Craig has a background in Destination Marketing, Event Management and was the General Manager of an adventure park prior to joining the ZORB team in 2012. There’s nothing Melissa loves more than a customer and a sale!

Charlotte Brady has been with the ZORB team for 8 years after completing a Bachelor of Comms and has a sound knowledge of the New Zealand tourism landscape and is a Board Member of Youngtec New Zealand. Charlotte is a ZORB all-rounder she can catch, launch, sell, take photos, writes a mean press release, speaks at a conference and is an expert at selling ZORB to the world.

Pete has been with the ZORB brand for over 15 years and there isn’t anything he doesn’t know about operating a site, working with a team and delivering a great customer experience. From helping to make ZORB balls.

If you have a general query, get in touch with the team in Rotorua, New Zealand – the centre of our ZORB universe.

If you have a general query get in touch with the team in Rotorua, New Zealand – the centre of our ZORB universe.

By using ZORB Rotorua, you accept our use of cookies.
OK